Believe it or not, yesterday (Tuesday) was our last “regular” field trip. This program is flying by so fast! Everyone is starting to talk/ask questions about our departure back to Georgia, which is a week from tomorrow. Don’t ask me yet if I’m ready to go home! Yesterday we explored the part of Co. Waterford called An Rinn–loosely Anglicized as “Ring” but usually not Anglicized at all because An Rinn is a Gaeltacht: an Irish-speaking region. There are seven Gaeltachtaí in Ireland with An Rinn being the farthest east. We visited Coláiste na Rinne, a secondary school where all instruction is carried out in Irish, and met a couple of its administrators before setting off on our tour with one of them. Even the tiny bit of immersion we were in contact with by spending an hour there was interesting. It’s disconcerting to be in a school and realize you can’t understand the intercom announcements or the conversations between the staff members. But the existence and popularity of the school (which offers summer intensive programs as well as regular academic instruction) demonstrates how important the Irish language still is. I will say that after 3 years coming here, a tiny bit of independent study, and generally paying attention, I can recognize a few words in basic Irish and figure a little more out from context. So at least I am learning something. And I had a great conversation with our guide Martín about how new words are coined in Irish, using “mobile phone” as an example. It turns out that there are 2 terms for it: “fón póca” (pocket phone) and the more properly Gaelic “guthán soghluaiste” (phone that moves around).  Googling suggests that “fón póca” and “guthán póca” are more common. The other example I suggested to Martín was “transgender” but we didn’t get around to that one, unfortunately.

The first stop on our tour was the famine graveyard in Ardmore, which is the final resting place–in unmarked graves–of a thousand or more victims of the famine in the late 1840s. Between deaths and emigrations, Ireland’s population was cut in half by the famine and still has not recovered. 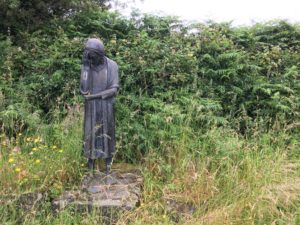 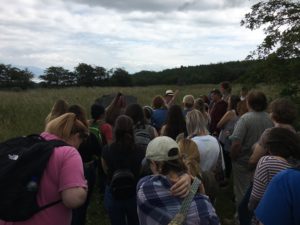 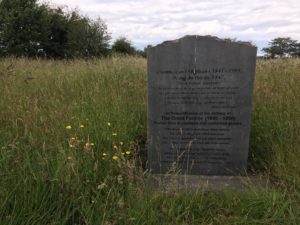 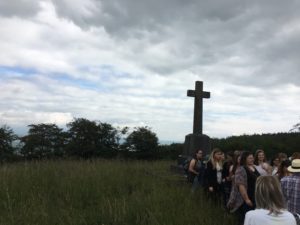 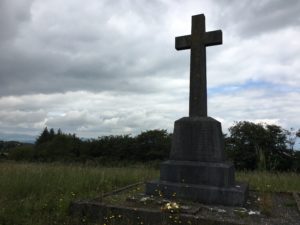 These places are sad but I am glad they still exist and people still visit them. Ireland’s history is still so present for its people–it’s something Americans could learn a lesson from.

With a few short stops along the way we arrived in the town of Ardmore where we set off with Liam, the former headmaster of Coláiste na Rinne, to tour some sites associated with St. Declan and take the Ardmore cliff walk. St. Declan lived in the 5th century and founded a monastery in Ardmore; he is considered at least locally to have preceded St. Patrick in bringing Christianity to Ireland: 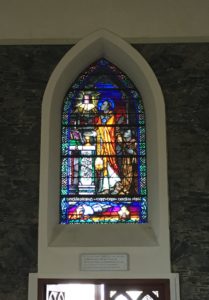 This church window reminds viewers (in Irish) that “Declan is the Patrick of Waterford.” 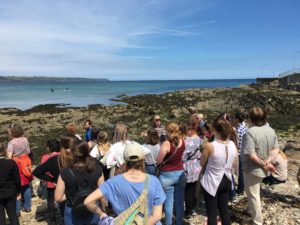 St. Declan is said to have come here in a boat by following a mysterious floating stone. 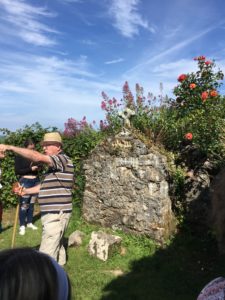 Liam shows us this altar near St. Declan’s well in Ardmore.

The cliff walk itself is 4 kilometers and a little strenuous (but only a little), but well worth it for the amazing views: 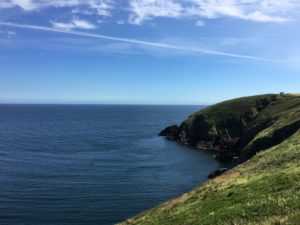 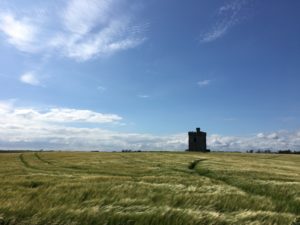 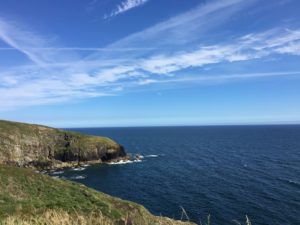 The walk ends at the last St. Declan site, where he built his monastery and where he is buried: 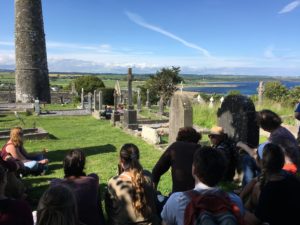 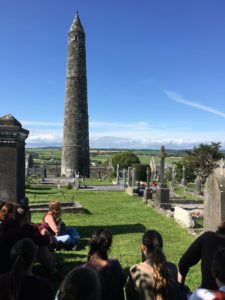 The medieval round tower at the site of St. Declan’s monastery.

This field trip is great because all the students start out panicking about the walking distance and end up dazzled by how beautiful the cliffs are. Liam and Martín are great guides, too. Their pride in where they live and its history and culture shines through. Makes you want to be Irish or at least learn to speak Irish!