I write this morning (Thursday, 18 July), to my surprise, from the Carlton Hotel at Dublin Airport, rather than from inside Terminal 2 where I expected to be doing a bit of duty-free shopping, having a latte, and waiting to be called to board our flight. It’s fair to say that things have not gone according to plan, but we are all comfortable enough and we all know how and when we are getting home. It just won’t be today.

We wrapped up the program last night with our “gala dinner”: a fancied-up meal in one of the WIT restaurants, for which all the students dress up a bit, which featured speeches (me), an art exhibition (the students), a poetry reading (also the students), and even a bit of dancing (yep, also the students). Everyone finished our cleaning and packing and many of us went out for at least one last beverage. I went to bed around 10:30 with the alarm set for 4:00 in anticipation of a 5:15 departure for the airport. In true form, I woke up around 3:15. Most of us have not had a lot of sleep; some of us, maybe none at all. But we were on time and rolled out at 5:15 as scheduled. We were about halfway to Dublin when my colleague showed me the distressing announcement on Delta’s app of a 3-hour flight delay. Our 12:20 departure was pushed to 3:10. Not great, but just a long wait in the airport. We soldiered on with equanimity.

One student had a connection in Atlanta for El Paso that he wasn’t going to make because of the delay. I advised him to go up to the desk as soon as we arrived and talk to them about rebooking. When I got inside the terminal after helping unload luggage, he came to meet me with an alarmed look. “Now they’re saying our flight is canceled,” he told me. “They want to talk to you.” Program Director Mode: Activated!

Here’s where I have to start giving Delta Air Lines and our students a ton of credit. The airport services manager greeted me and immediately outlined a plan. He had been on the phone with Delta and with the Carlton and gotten arrangements made for our group before ever approaching or speaking to me. I was thus able to turn to the students and tell them exactly what was happening and what we would do next. Delta would pay for our hotel night, meals, transportation between the airport and the hotel, and would rebook us as soon as the cancellation of the flight became official. They were calling the hotel to come and get us early so that we wouldn’t be sitting in the airport any longer than necessary. They also gave us a voucher for €3 each for coffee while we waited for the hotel pickup.

The students were distressed—some were tearful—but everyone stuck together, rallied, and comforted each other. Some watched luggage while others took restroom breaks. Some made the coffee run while the rest stayed behind to call parents. No one asked unanswerable questions e.g. “Why are they doing this to us?” Some were even checking up on me. “How are you doing? This must be really tough for you!” I’m so grateful to be able to say it hasn’t been as hard as it could have been. Communication has been clear, Delta has been responsive, and students have been attentive exactly when we most need them to be. I feel for them as they deal with this disruption. They and their families aren’t used to it. Family members had taken time off work to pick their students up from the airport. One grandmother had come the night before and stayed in a hotel, and would now need to get an extra hotel night and figure out what to do about her pets. Everyone is very tired, most of them are pretty broke, and we are all ready to be home. But it could have been much, much worse.

Delta automatically rebooked us all for tomorrow and I realized when the new confirmation came in that they had actually added a flight to accommodate the cancellation. They could hardly have done otherwise; it’s peak travel season and “our” flight (DL177) is full every day. But I was far from expecting it and was envisioning a nightmare scenario in which we were split amongst multiple flights and plane changes to get home. If everything goes as planned tomorrow, I’ll consider victory well snatched from the jaws of defeat.

Update: Dateline 33,000 feet over the Atlantic Ocean, near the southern tip of Greenland. Victory is ours! The afternoon and evening were relaxing and pleasant once we got into our rooms and could seize the day for enjoying the hotel or the city. This morning was a rush through check-in, Irish security, TSA security, and customs preclearance, but we all made it onto the flight in good order and good humor. About 4 hours from now we’ll be landing in Atlanta.

Terrible photo but pretty representative of what I like to do in Dublin!

Henry Street as seen on my Instagram (I forgot to save the picture!) 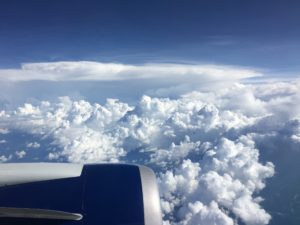