We returned Saturday evening from touring the Ring of Kerry, a 179-kilometer (111-mile) scenic/tourist/historical route around the Iveragh Peninsula in Co. Kerry in the southwest (Munster province). It’s probably the part of the country that I most wish my parents could have seen. They were always up for a scenic drive and treated my brother and me to many of them as we were growing up!

From Waterford we headed west on Thursday morning toward our base of operations in Killarney, with a stop in Cork to break up the drive. I hadn’t been to Cork before–last year I missed this day on the program because of an emergency–and I wish I’d had more than a couple of hours to spend there this year. It’s bustling like Dublin but more compact-seeming. I just had time for lunch with colleagues and a very quick dip into a couple of stores (several of us went to Lush for bath bombs in anticipation of the bathtubs in our hotel rooms!) before hitting the road again. 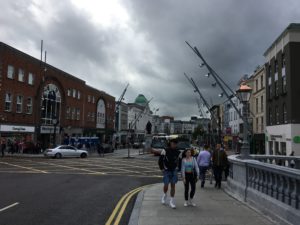 I only took 4 pictures in Cork. I’m a good program director but a terrible blogger sometimes. 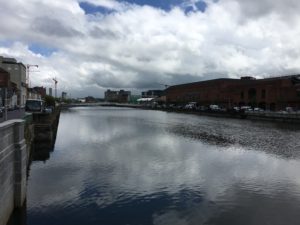 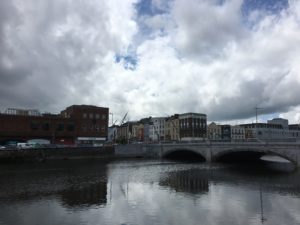 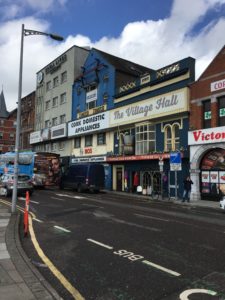 Had to capture the giant moka pot on the side of that building!

After 2 years enjoying the golf course views and occasional deer sightings at the Castlerosse Hotel on the outskirts of Killarney, we had to change hotels this year to get the dates we wanted. We chose the Killarney Towers Hotel, right in the city center, and were not disappointed. Killarney town is pleasant and walkable, with lots of places to eat, drink, and shop, and the hotel is very comfortable, especially after 4 weeks of dorm beds and cafeteria food. I can’t speak for anyone else but I slept extremely well and enjoyed my bathtub very much.

Friday morning we got the worst weather of the day out of the way in the first 20 minutes while walking to the bus. The rest of the day was excellent–blue skies and puffy clouds but not too hot. Touring the Ring of Kerry is one of the few times during the program when we really need good weather, so we were blessed to get it! We visited some towns and historic sites and just plain gorgeous views during the day: 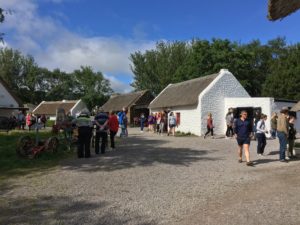 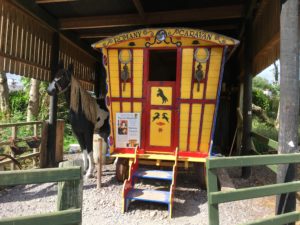 This “Romany caravan” is not very different from what traditional Irish Traveller caravans looked like in the 19th and early 20th centuries. 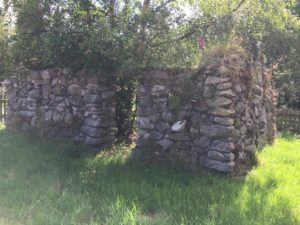 The remains of a 19th-century stone cottage whose owners left because of the Famine. 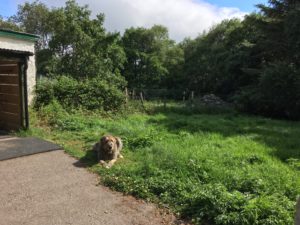 The Bog Village has two Irish wolfhounds. They’re enormous but smiley and eager for pets. 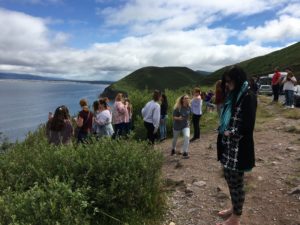 Getting photos at a scenic overlook. 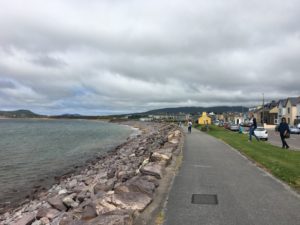 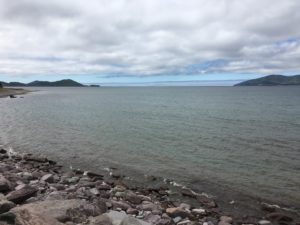 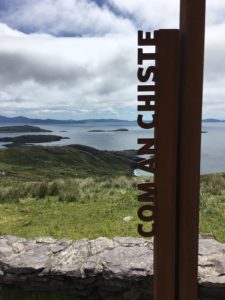 From Com an Chiste you can see to the Skelligs if the weather is clear enough. We could not see Skellig Michael a.k.a. the Star Wars island. 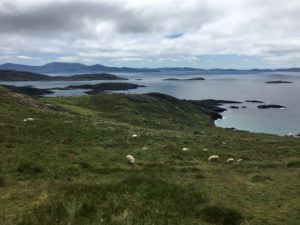 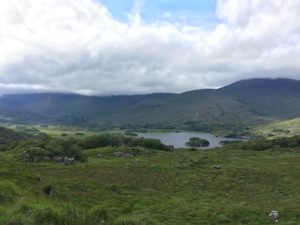 Our final stop was the Ladies’ View, so called because Queen Victoria and her ladies-in-waiting thought it was the prettiest place on the Ring when they toured it. 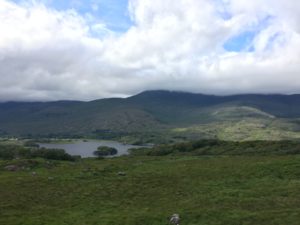 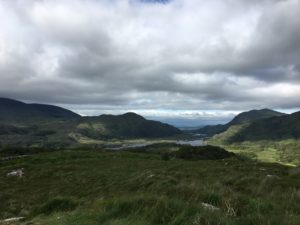 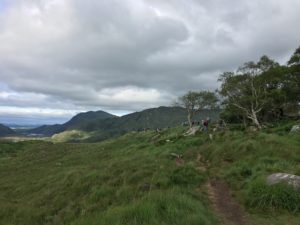 Saturday we returned to Waterford by way of Blarney Castle. I continued my tradition of NOT going into the castle or kissing the stone. It was a particularly good day for not kissing the stone, because the place was packed and the queue was massive–up to an hour and a half wait. Luckily, the grounds and gardens are beautiful and it’s a great place to walk around and take photos. I never feel like I am missing out by not going in. The Blarney Castle “campus” is also the home to Blarney Woollen Mills, which bills itself as the biggest Irish goods store in the country. If you want a souvenir of Ireland–from a €3 plastic leprechaun to a €3000 piece of Waterford crystal–you can find it there. The number of Blarney Woollen Mills shopping bags that came back with us on the bus Saturday afternoon was . . . considerable. 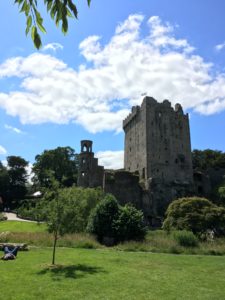 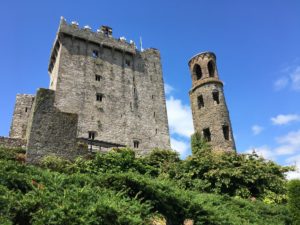 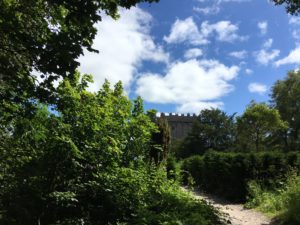 What’s not pictured in my Ring of Kerry pictures is the time we spent riding the bus between “places.” The journey is at least as good as the destination; the point is definitely not to get there but to be there. And the views from the jump seat on the bus are spectacular! Just remember that cars go clockwise on the Ring and buses go counterclockwise (anticlockwise if you’re Irish). In a fair few spots the road is only about 1.25 lanes wide and someone has to move aside to let someone else pass. The Ring would not function if buses had to try to pass each other. Even with everyone moving in their prescribed directions, there’s always a BMW driver who thinks he can play chicken with a bus and win. I gotta give a shout out to our bus driver, Tony, who was doing the Ring for the first time and crushed it. He got us through Beemer encounters, hairpin turns, narrow tunnels, sections of road that were obviously paved-over cow paths (the Irish word for “road,” bóthar, literally means “cow path”), and a narrow escape from our hotel Saturday morning after a food delivery truck blocked the bus lane. I hope he had a really restful Sunday!

And now it’s Monday afternoon and we are officially on the short countdown to departure for home early Thursday morning. Already???